‘We try to follow Jesus in everything we do’

What does the Governing Board do?

The governing board operates at a strategic level, leaving the school’s senior leadership responsible and accountable for the operational day-to-day running of the School.

The core strategic functions, as a Governing Board are:

The Governing Board at St Margaret Mary’s has twelve members all of whom bring a wide range professional and personal experience to support the work of the school. The board consists of seven foundation governors who are appointed by the Diocese of Salford, two parent governors elected by the parent body, one staff member elected by the staff, a local authority governor nominated by Manchester LA and the headteacher.

In addition to broaden the expertise of the Governing Body there are two associate governors.

The members of Governing Board for 2022/23 are shown below. 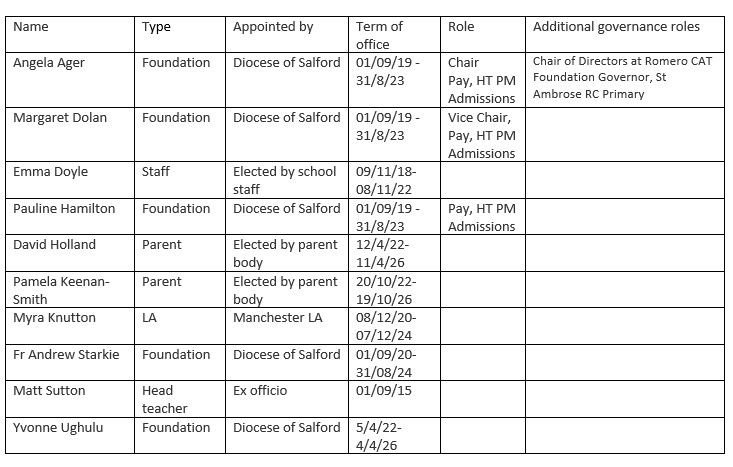 Donna Blackwell and Rachel Walsh. Associate Governors are appointed for one year at a time

During 2022/23, the governing board has decided that it will meet a minimum of seven times in the year as a full board.

There are separate committees for pay, headteacher’s performance and admissions which each meet annually to deal with these matters.

Governors who left the board in the last 12 months

At the start of the pandemic in March 2020, meetings moved to a virtual setting and the governors met as a full group from then until the end of the year. They continued with this for 2021/22. 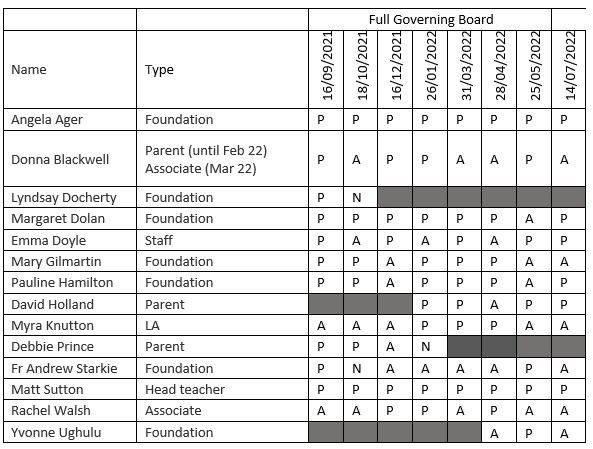 The admissions and   pay committees met once in the year.